Blore Heath 1459
Wargames gnu (or guru) Dave Andrews expressed interest in a game and knowing the 15th century was a favoured period of his, Michael plumped for Blore Heath. So a couple of nights ago the table was set and what looked like it should have been a one sided battle was played out.
The battle site is quite simple with a steep sided brook running between to slightly elevated areas of high ground. The smaller Yorkist force, led by Richard Neville, Earl of Salisbury, was on route to meet up with Richard, Duke of York, when he was confronted by Lord Audley’s much bigger, although less experienced, force. Salisbury decided to stand anchoring his right flank on a wagon laager and wait for the onslaught.
In our game Dave took Audley’s ‘battle’ made up of five households and the cavalry made up of two heavy units and two light. Aly (Bongo) Morrison took Lord Dudley’s ‘battle’ of five infantry units. Nigel Stillman…yes, that Nigel Stillman… of WRG and Warhammer fame, was in charge of Sir John Stanley’s ‘battle’ of four units. One ‘battle’ was required to be on the table behind the ‘stout hedge’ at the beginning of the game, this was Nigel’s.
On the Yorkist side Alan played Salisbury with one ‘battle’ of three households and another ‘battle’ of three. He was joined by our friend and work college, Colin Dixon, who controlled the third ‘battle’ of three infantry units and the cavalry of one heavy and one light unit. Although in the original battle the Yorkists didn’t use a cavalry arm Michael thought they were already disadvantaged enough!
Michael umpired and we used an adapted version of Hail Caesar.
After the initial Lancastrian ‘battle’ was placed the Yorkists were allowed to place the laager and one of their ‘battles’ on their side of the table. How much thought went into where the laager was placed is not really apparent as it ended up two thirds of the way to the left of their deployment area with the ‘battle’ in it and either side. The rest of the Yorkists could now make an appearance, rolling to come on. This they all did apart from the cavalry, leaving the right flank a little vulnerable.
The Lancastrian forces now rolled dice to come on and did so in splendid fashion flowing down the slope, well, that is all apart from Nigel on their right flank. His ‘battle’ needed to negotiate the hedge, but try as he might he hardly moved for four turns. Dave’s central division pushed forward along with the cavalry, eager to get to grips in hand to hand. Aly’s ‘battle’, on their left, kept up and with the aim of crossing the brook and out flanking the Yorkist’s weak right flank. The Yorkist cavalry turned up in time to plug the gap on their right but kept out of sight behind the hill. Meanwhile, Dave and Aly’s divisions attempted to cross the brook and with the first volley of arrows broke one of Colin’s household’s. It was very bad luck, only one casualty was caused but Colin needed to check his morale and scored a two with two dice! Things looked to be going the Lancastrians way, apart from Nigel’s tardy ‘battle’! But Dave’s luck in the centre was running out. He was up against the majority of enemy who were uphill and shooting him up badly. The cavalry were stuck in the deep sided brook and remained so for awhile. Aly threw a blunder (a double 6) but luckily moved forward. Nigel eventually started to move but also threw a blunder in the following turn, which happily saw his men surge ahead and into the brook.
The Yorkists definitely had the upper hand. They managed to break Dave’s central ‘battle’ and getting a charge off with their cavalry into Aly’s ‘battle’ emerging from the brook. Unfortunately, the cavalry’s charge bonuses were nullified from being shot up on the way in and a stalemate of a melee ensued. The next turn Aly’s troops wrapped around and hacked up the horsemen. One broken division each. At last the Lancastrian horse extricated themselves from the brook and charged in. The first charge was repelled by Colin’s arrows, the second charge was a stalemate but the third charge had the desired effect which broke another unit and a second ‘battle’. This meant the Yorkists had half their army broken and so fled the field!
T’was a jolly good game and for the most part went the way of the original battle with the Lancastrians suffering from some very bad luck with the dice. They had three blunders all told, but won in the end.
We’ve included the adapted stats that Rick Priestly worked out. They are at the end of the photos. 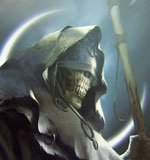 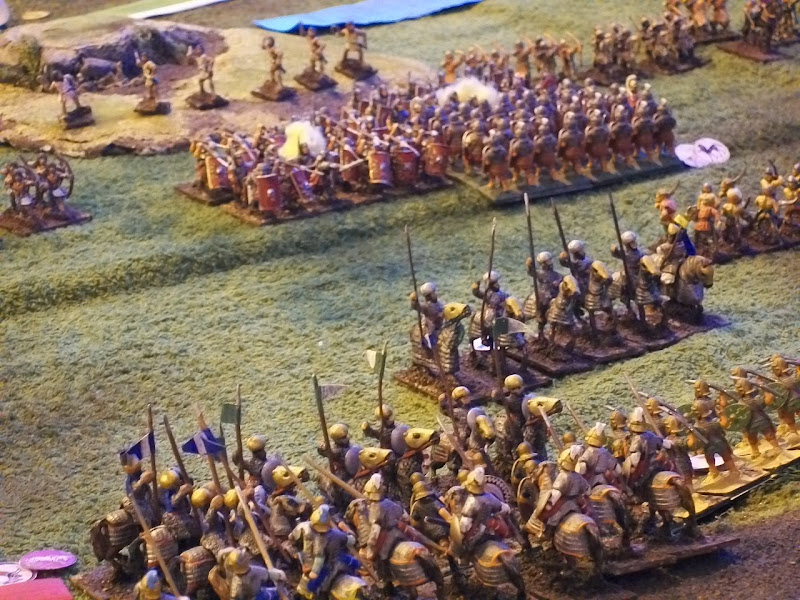 leur site FB a écrit:Perry Miniatures Most of the boards were made by Dave Andrews. They're covered in dyed towelling and then sprayed with various shades of yellow and green.
21 janvier, 14:03 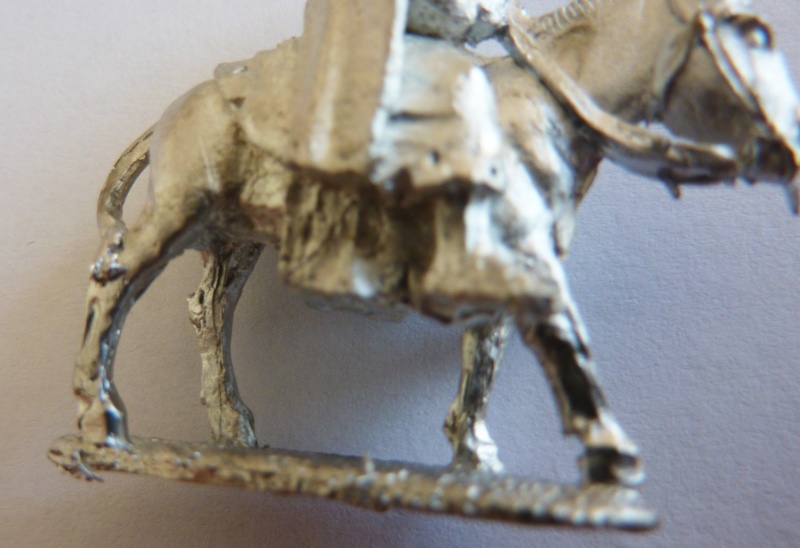